Geoffrey Roberts is a fairly accomplished and esteemed historian. His writing and works are accessible to folks who do not specialize in history, which is a huge bonus.

Victory At Stalingrad by Geoffrey Roberts seems, at first glance, to be a very satisfying, engaging and enjoyable read but reveals some problems upon deeper inspection. It really is an enjoyable book, but Roberts would have you believe soldiers are just faceless numbers being acted upon by Stalin, Hitler and various Generals. Any Soldier or servicemember would tell you otherwise.

Roberts starts out discussing Hitler, Stalin and what led up to the Battle Of Stalingrad. For a summary of the operations, psychology of both leaders (and fascism/communism), and the different historical interpretations of the battle, it really is hard to beat this book. Roberts has an enjoyable writing style that still conveys scholarly information. One does not have to be a Soviet or Military specialist to read and understand this book, but if you have read extensively on Stalingrad you can still glean some new information on how historians view the battle.

My biggest issue with this book (and a point that makes it hard to recommend) is that Roberts gives little agency or voice to the soldiers in his book. I understand authors work under a page and word count limit, but Generals and national leaders are only a small part of the story; if the weather, fighting or any other variable had broken the will of the Soviet or German fighters history would be completely different. Roberts does not touch on this and seems to forget that Armies, Corps, Divisions and even Squads are made up on individual Soldiers who fight and die. Without finding a way to motivate, equip and lead them into battle, even the best General (hey… look at Field Marshall Paulus) will fail in combat.

If you want to learn more about the Eastern Front during World War II and the Battle Of Stalingrad in particular, I recommend this book as a great starting point, but it definitely needs to be supplemented with some other works to obtain a full picture. 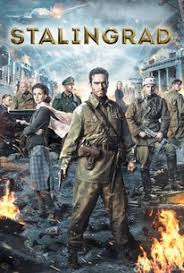 Another, though less scholarly, depiction of the Battle of Stalingrad…