What always struck me about communism was the blatant hypocrisy of the revolutionaries and leaders; instead of building examples of Marxist and communist economies, societies and governments they were more interested in imposing communism on the masses. This created the need for a centralized, totalitarian government that could crack down on the people. The biggest, glaring example of communist hypocrisy is the roles revolutionaries and communists always assume they deserve: some sort of commune leader, commissar, re-education minister or another “soft” job. Nobody wants to work 16 hours on a collective farm, break their body down in a mine shaft, or even machine parts critical to the infrastructure and military components of state and society.

This can be seen in Russia and the USSR and in many other communist movements. One example would be Leon Trotsky: with no military experience, and only time spent running a few businesses and living in exile, Trotsky, a prominent writer and thinker became the leader of the Red Army. As the leader of the Red Army, he made a series of controversial decisions that resulted in things like blocking squads (the use of friendly units shooting other friendly units to prevent them from retreating or changing the battle plan) and the selection of Military leadership by party cronyism. He relied on the bayonets, blood and labor of his soldiers to remain in power and help the Bolsheviks seize and maintain political power. Looking at Trotsky objectively, he should have been forced to work in some sort of factory, mine, or farm like the rest of the writers and thinkers who never really did anything prior to the revolution. If his writing and thoughts were decent enough to merit publication in the state sponsored apparatus, maybe he would of lived out his days as a political thinker for the party. Ultimately though, Trotsky seems to be the epitome of “after the revolution, I’ll run things while everyone else works 16 hours a day”. 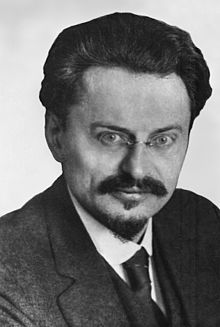 Conveniently out of the country for the war and revolution…

Another shining example would be Fidel Castro. A highly successful communist revolutionary, Castro’s family owned a successful farm in Cuba. Identifying with the Marxist-Communist view, Castro became a revolutionary and started spreading his Marxist ideals. Eventually, this led to the overthrow of the Cuban government and the establishment of the Communist regime in Cuba. Interestingly enough, coming from a family that owned a farm, and being wealthy, Castro used his privilege to attend university, study and build his network… Instead of implementing the Marxist principles he agitated for at his own family farm. As a revolutionary leader though, it is understandable that Castro would become the political strongman in Cuba after the revolution; what is highly hypocritical though, is the fact that Castro never took simple steps in his own life and personal economic means to establish, cultivate and spread Marxism.

This hypocrisy of communism is one of the reasons why it has been impossible to implement a successful communist economy, and a successful communist government. Revolutionaries and communist leaders are not interested in doing the backbreaking labor to build a new and successful society, but are instead too focused on overthrowing the old society, grabbing for power and ensuring that when they do attain power, they are well entrenched in the communist elite. It might not even be a complete power grab on the behalf of all communist agitators; by simply believing in communism, folks think they know better ways to spend money, improve society and “fix” things. They want to use their “superior” wisdom to fix society, so of course, they shouldn’t be stuck in the coal mines with the rest of us!

Communism starts with a “seizing of the means of production”, forcefully taking over the economic reins of the country and turning things over to the “workers”. Factories though, still need to produce a product, farms need to produce food and the trains need to run on time. It’s possible to see inequality everywhere in a capitalist society, but the bigger inequality is an armed revolution to literally steal the “means of production” and force people to work for you.

I am not a fan of communism. In theory, it’s interesting, and Marxism can be useful to study and look at society, but in implementation, it never works. Sure there are the outlier arguments about early, proto-civilizations and early man being “pure communists” and examples of mostly limited socialist programs having some success in otherwise capitalist, democratic societies, but communism itself just does not work. I think this was decided during the 1980’s and culminated in the collapse of the Soviet Union, and it can be seen in the present day in places like Venezuela.

3 thoughts on “The Hypocrisy of Communism: From Revolution to Implementation”